Skip to main content
By using the site, you agree to the personal data processing policy.
Ок 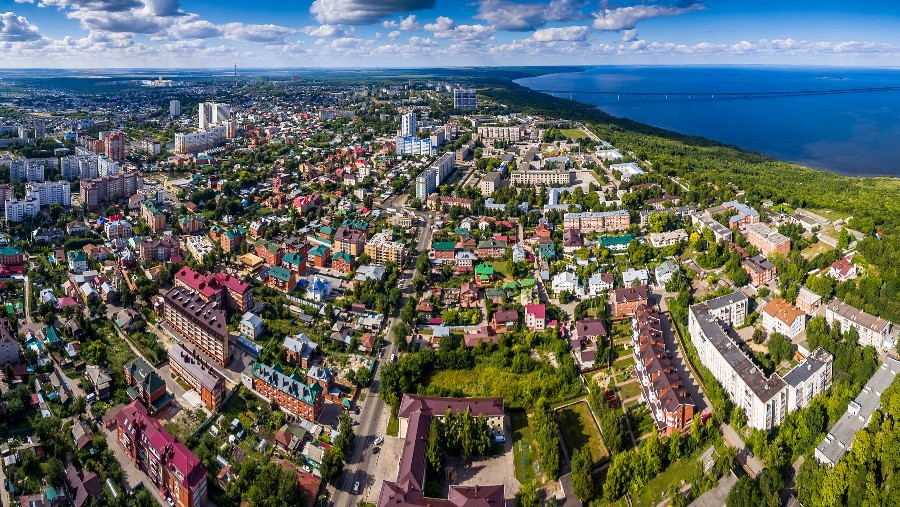 The city of Ulyanovsk, for sure, is associated among those who have been here with the beautiful Volga expanses, narrow streets and buildings of the 19th century in the city center, as well as outstanding cultural figures - the writer Ivan Goncharov, the historian Nikolai Karamzin, the artist Arkady Plastov and, of course, the famous politician Vladimir Ulyanov.

The territory of the city is 622.5 sq. km, inhabits Ulyanovsk more than 600,000 people of about 100 different nationalities - here you can meet Russians, Tatars, Chuvash, Moksha, and representatives of many other nationalities.

If desired, from the center of Ulyanovsk, you can walk almost to the very outskirts of the city - the only inconvenience can be windy weather, which is far from uncommon here. For this, many people call Ulyanovsk the “City of the Seven Winds”. However, this phenomenon also has its advantages - despite the fact that the industry is quite developed, the air is always clean even in the city center.

Ulyanovsk is a city where two rivers, the Volga and the Sviyaga, form a "mesopotamia" - a unique territory in terms of energy. The fact is that the Sviyaga, although it is a tributary of the Volga, flows here in the opposite direction from it.

The region is located on the territory of the Volga Federal District and, by Russian standards, not far from the capital - from Ulyanovsk to Moscow, about 900 km, which can be covered by train in 15 hours.

The widest part of the Volga is located on the territory of the Ulyanovsk region - its width here reaches 40 kilometers. Two bridges across the Volga have been built in Ulyanovsk: "Imperial" and "President", the last of which is the longest bridge in Russia.

The history of Ulyanovsk goes back to the middle of the 17th century. In 1648, the boyar Bogdan Khitrovo, by decree of Tsar Alexei Mikhailovich, in order to protect the eastern borders of the Russian kingdom from the raid of nomadic tribes, founded a fortress city on the very top of the high Volga slope, which he called Simbirsk.

In the autumn of 1670 Simbirsk was besieged by the army of Stepan Razin. Razin was unable to successfully complete the siege, was wounded in battle, after which his comrades carried him to the river, loaded him into a boat and sailed down the Volga. In 1672, for the defense of Stepan Razin, Simbirsk was granted the first coat of arms. In 1774, the prisoner Emelyan Pugachev, the leader of the Peasant War of 1773-1775, was interrogated in Simbirsk. in Russia.

In 1780, Simbirsk became the main city of the newly established governorship. It has turned from a fortress city into a provincial town with a developed infrastructure. The best and richest part of it was located on the Crown, where there were cathedrals, provincial administrative institutions, educational institutions, private mansions, craft workshops, public gardens and boulevards. Nearby was a busy shopping area of ​​the city.

One of the first theaters in Russia and the first Karamzin public library in the Volga region were opened in Simbirsk.

The city was best known as the birthplace of Vladimir Ilyich Ulyanov (Lenin). In this regard, in 1924 Simbirsk was renamed Ulyanovsk.

During the Great Patriotic War of 1941-1945. in Ulyanovsk, a number of industrial enterprises evacuated from the western regions of the USSR were deployed, including part of the Moscow Automobile Plant. In 1943 the city became the center of the newly formed Ulyanovsk region.

Ulyanovsk is the only city in the Volga Federal District with two A-class airports: Ulyanovsk-Central and Ulyanovsk-Vostochny International Airport. Both airports allow you to receive aircraft of all types without takeoff weight restrictions. The Ulyanovsk-Vostochny airport can even receive space shuttles. Another airport is famous for the famous footage from Eldar Ryazanov's popular comedy "The Adventures of Italians in Russia" filmed on its territory.

In the region, much attention is paid to culture and cultural policy, as well as literature. People working in the field of literature strive not only to preserve the history of the city and popularize the work of famous writers and poets, but also to introduce new approaches and implement creative projects. Every year, many literary events are held here: the International Literary Prize. I.A. Goncharov, Poetry Prize, Literary Festival "Slovo", International Cultural Forum, dedicated, among other things, to cultural issues.

In 2015, Ulyanovsk received the status of the Most Reading Region of Russia, and also entered the UNESCO Creative Cities Network in the Literature category.